In this post, we will perform more serious patch diffing to identify memory corruption and command injection issues in order to provide reduced test cases that can be used to develop a fully working exploit.

You can then unpack each firmware image with binwalk:

The binary we’re interested in will be located in _FIRMWARE_NAME/squashfs-root/usr/sbin/httdp.

I start by creating a Ghidra project named ‘RV110’ and create two subdirectories named after the firmware revision numbers.

I then import the httpd binary from each firmware root filesystem in its specific directory. One important thing to do is to provide the library search path so that Ghidra can also load the system libraries the binary is dynamically linked with.

To do so, click on ‘Options’ then enable ‘Load external libraries’ and click on ‘Edit paths’. You should provide two paths from the firmware rootfs: /lib and /usr/lib. 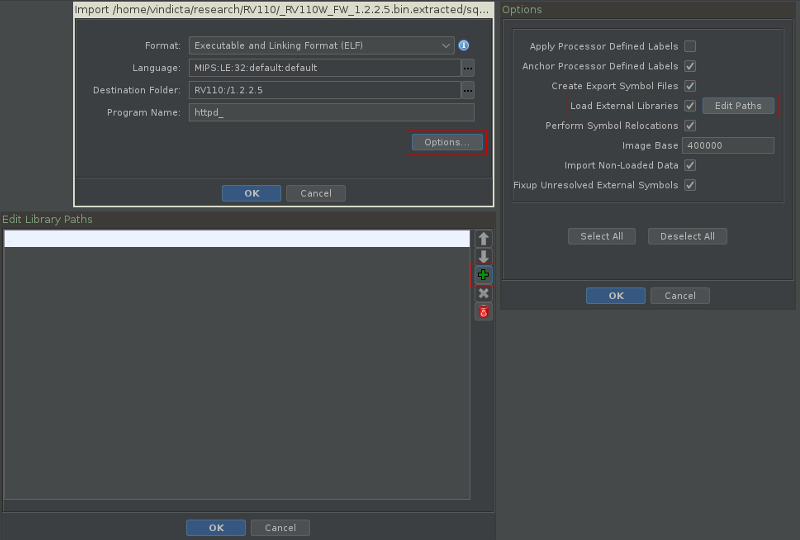 When each file is loaded into the project, double click on them and perform auto analysis. When the analysis is done, save the file and get back to the main window.

Now that our binaries have been analyzed by Ghidra, we can launch a version tracking session. Name the session to your liking and set both versions of httpd as source and destination programs:

I won’t go into the finer details of Ghidra version tracking tool, but I recommend you read this excellent post by threatrack: Patch Diffing with Ghidra - Using Version Tracking to Diff a LibPNG Update.

Once loaded, click on the magic wand button to execute “Automatic Version Tracking”. Wait for all the correlators to run and then click on the filter button on the bottom right. This will load the following window:

I had the best results identifying patched functions with these exact filters. The version tracking table should list two functions:

The first one (FUN_0040c400) seems to be a good candidate for memory corruption issue (either CVE-2020-3323 or CVE-2020-3331). Precisely 8 calls to strcpy were changed to strncpy in this exact function. This function handles form submission from the setup wizard that can be launched on the web management interface to execute the device’s first configuration (WAN interface, DNS, NTP, DHCP ranges, etc). When identifying dangerous calls, I always bookmark them (Ctrl-D in Ghidra) to find them back faster.

At this point I pretty much hit the limit of what Ghidra version tracking can do for patch diffing and I still had to identify another memory corruption vulnerability (either CVE-2020-3323 or CVE-2020-3331), so I switched to Bindiff.

Update It turned out these insecure calls were not linked to these CVEs and just happen to be cleanup performed by Cisco development team. Keep on reading to learn about the actual code responsible for these CVEs :)

Performing binary diffing with Bindiff requires the ability to export analyzed binaries to BinExport format. The BinExport project provides a Ghidra plugin to do so but you need to assemble the jar file yourself. This excellent guide by Hashim Jawad will guide you through the installation steps.

I had GLIBC version issues with the latest version of Bindiff so if you encounter the same problem, just use version 5 instead of version 6. 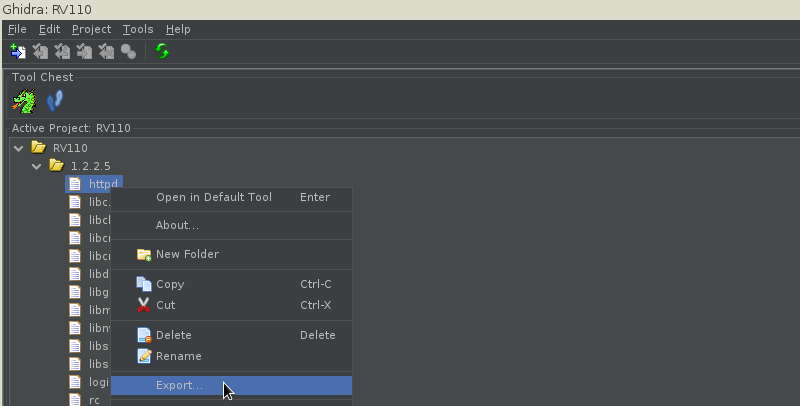 Select ‘Binary BinExport (v2) for BinDiff’ as format and set your output filename: 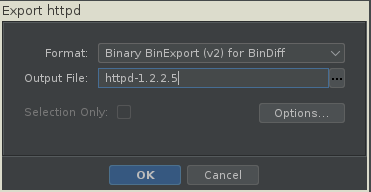 Repeat the operation for both file and launch BinDiff (bindiff -ui on Linux).

BinDiff will present you with a nice table of matched functions, order them by similarity ratio to get the one that differs the most first:

After a while, I had bookmarked all interesting code sections in Ghidra. A lot of insecure calls have been cleaned up by the development team, even if not exploitable per se.

I’ll go over each CVE in the next sections.

CVE-2020-3323 is described as “A vulnerability in the web-based management interface of Cisco Small Business RV110W, RV130, RV130W, and RV215W Routers could allow an unauthenticated, remote attacker to execute arbitrary code on an affected device.”.

At first I thought this memory corruption was linked to insecure calls to strcpy that were fixed between revision 1.2.2.5 and 1.2.2.8, but it did not make sense as these calls were unreachable from an unauthenticated context. After a while, I finally identified what triggered the memory corruption: an insecure call to sscanf in the guest_logout_cgi function.

The function is quite large but the pseudo-code below should give you the gist of it:

The submit_button value is user controlled and given that size is not explicitly provided, we can overflow acStack108 or acStack172. The curl command below is a reduced crash case that will overwrite the return address with 0x42424242 (BBBB).

Here’s the function offsets for reference:

CVE-2020-3332 is described as “A vulnerability in the web-based management interface of Cisco Small Business RV110W, RV130, RV130W, and RV215W Series Routers could allow an authenticated, remote attacker to inject arbitrary shell commands that are executed by an affected device.”.

I identified (now patched) command injections in these functions:

Each of these functions follows the same insecure procedure: 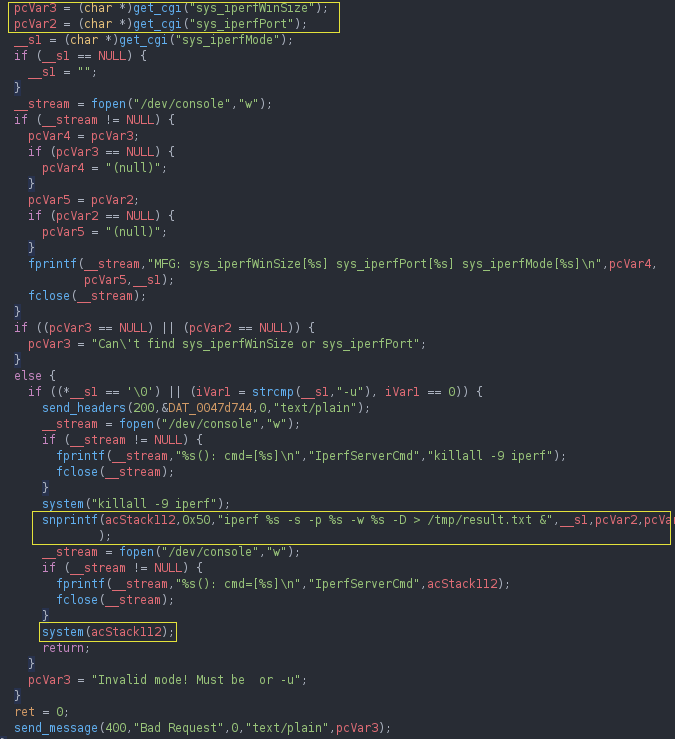 I still don’t fully understand how these functions can be called from the web interface. They seem to be called by an undocumented CGI script named mfgtst.cgi. I found some obscure reference to it on the Internet, mentioning that simply calling the CGI script would trigger a denial of service on some old Linksys device. The script itself looks like a diagnostic tool that will check wireless settings, USB settings, and performances.

I finally identified how these CGIs calls can be triggered. The curl command below will inject the command ping -c 3 10.10.10.100 into a system call by using double pipes.

Note that the call must be authenticated and that a specific NVRAM value (mfg_radio) must be set to “on” manually for the injection to work.

I learned a lot of things over the course of this patch diffing session. I’m now able to navigate and understand both Ghidra version tracker and BinDiff user interfaces. I identified blind spots in my review process, such as the fact I never looked for calls to sscanf in the past.

This exercise gave me a lot to think about, especially on the subject of automation. It would be great to have static and dynamic analyzers for embedded device binaries that can not only identify insecure C calls, but can filter the noise to only show the ones that are most likely to be exploitable. A lot of calls to system in these firmwares are using fixed strings for example, and we’re not interested in those.

I have had interesting results using Radare2 and Unicorn engine and I’ll most likely publish something in the coming months. The idea is to identify functions in the binary that calls system() using r2. Then we fully emulate the function using Unicorn Engine while hooking system and get_cgi. The get_cgi hook would return a tainted value, while the system hook would proceed by checking if the system call parameter contains our tainted value in an insecure way (i.e. unquoted).

There’s a lot to do, but I think I know how to move forward ! As always, if you have any question just get in touch on Twitter or by email :)